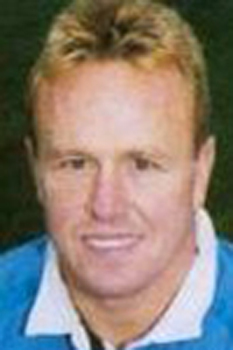 Scrum half Kevin Ellis played Rugby Union and League from the 1980s until 2011. His union career was spent at Bridgend, Maesteg (twice) Treorchy, Sale, London Irish, Cardiff, Pontypool and Ebbw Vale. In 1990 Kevin went north and joined Warrington, also playing for Workington Town, Gold Coast (in Australia), Bridgend Blue Bulls and the Celtic Crusaders. Ellis was selected for Wales on 15 occasions and also had one Great Britain test cap to his name. In 2010 at the age of 45 he played in the SWALEC Cup for Maesteg.