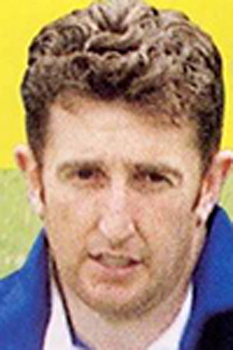 Jonathan Davies (popularly known as Jiffy) was born in Trimsaran, Carmarthenshire.
Jiffy started school at Trimsaran Primary, where his teacher Meirion Davies introduced him to rugby and he started playing Rugby Sevens. At 17, Jonathan left school and became an apprentice painter and decorator. After developing at Trimsaran, he was given a trial with Llanelli but was rejected. Neath gave him a chance and he signed for them in 1982.
After 35 games for Neath he was selected to play for Wales against England at Cardiff Arms Park. Being named ‘Man of the Match’ after scoring a try and drop goal.
In 1988 Jonathan left Neath to join Llanelli but they put pressure on him to commit himself wholeheartedly to them and he decided to move to Rugby League, signing for Widnes. After four successful seasons at Widnes, he moved to Warrington. During his time in rugby league he represented Great Britain and Wales, and spent some time playing in the ARL (Australian Rugby League).
In 1995 Davies (with Union having become a professional game) returned to South Wales and signed to play for Cardiff, making 37 appearances and scoring 243 points (including 14 tries).
After retiring from playing, he worked as a television pundit for the BBC covering both codes of rugby, in English and Welsh as well as hosting his own rugby themed chat show – Jonathan on S4C along with referee Nigel Owens and ex player Rowland Phillips.
Davies is the son of Diana and Len Davies, who played centre for Swansea and Llanelli.