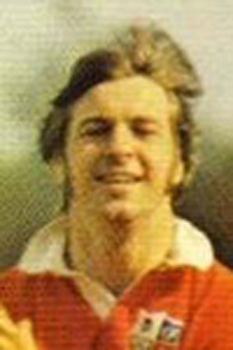 Barry John (the king) began his rugby career as a schoolboy playing for his local team Cefneithen before joining Llanelli in 1964. In 1967 he left to join Cardiff and formed a partnership with Gareth Edwards that would become one of the most famous half back pairings in the world. A career that included 93 appearances for Cardiff, 25 Welsh caps, five test matches for the Lions (one in South Africa in 1968 and four in New Zealand in 1971) and five appearances for the Barbarians was brought to an abrupt end in 1972 when Barry John suddenly announced his retirement at the age of 27.
Barry John was inducted into the Cardiff Rugby Hall of fame in 1999 and further details can be found in that section of the club website.