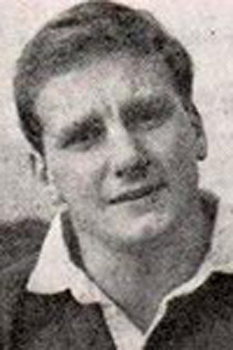 David Kenneth Jones (known as DK) was a schoolboy superstar from the Gwendrath Valley. First capped for Wales U15s as a Full back he played at outside half in the U19s team. His first class rugby career started with Llanelli whilst he was still at school. He stayed at Llanelli for three seasons, interspersed with a year at Oxford University where he gained a Blue in the Varsity match. In 1965, after playing over a hundred games for the Scarlets, he joined Cardiff, going on to play 104 games over five years. The first of his 14 senior Welsh caps was in the Centre against England at Twickenham came in 1962 and at the end of the season he was selected for the Lions tour to South Africa, where he played in three test matches. Jones was in the Lions party again in 1966 when they toured Australasia and he again played in three test matches, one against New Zealand and two against Australia.