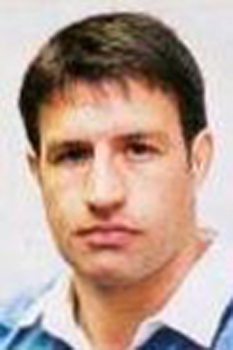 Mike Voyle was born in Caerphilly in 1970 and played for Penallta, Newbridge, Ebbw Vale, Llanelli, Newport and Cardiff, playing 44 games for the Blue and Blacks. Mike played one game in the 1994 – 5 season and then returned in 1999 after spells at Newport and Llanelli. After representing Wales at U20 and U21 level he won an "A" cap, against Romania in 1997, and 22 senior Welsh caps, making his debut as a blood replacement against Australia in Brisbane in 1996 on the Wales summer tour - is the only Penallta player to have represented Wales. In 2003 and retired from the game and moved to New Zealand to work as an agent for a Real Estate company.