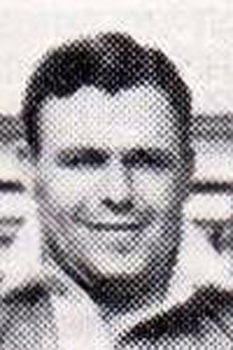 Clifton "Cliff" Davies (The Bard of Kenfig Hill) was a short, tough prop who played 190 games for Cardiff in the years immediately following World War 2. Wales (16 caps), Barbarian and Lions Tours followed – the Lions tour being to Australia and New Zealand in 1950.
Born in 1919 in Kenfig Hill Cliff Davies was known within rugby circles for his cheery demeanour and baritone singing voice. He began his rugby career with Kenfig Hill before moving to Bridgend. After the war, Davies was persuaded to join Cardiff by Jack Mathews and joined in the 1945/46 season. Before retiring in 1952 he had scored 20 tries.
Clifford Davies passed away in January 1967 at the age of 47.