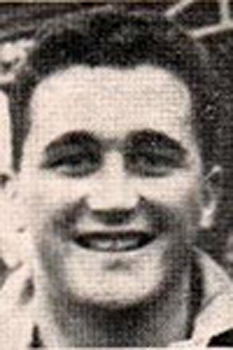 William Roderick (Roddy) Evans was regarded as one of the finest lineout forwards in Welsh and British rugby in the late 1950s and early 1960s. Born in Porthcawl and educated at Cowbridge Grammar School he played in the same Welsh Secondary Schools pack as the Blue and Blacks Howard Norris in April 1953. Five months later, and still only 18, he made his debut for Cardiff Athletic against Blackwood. Within a few weeks later he was elevated to the first team to play against Leicester. In 1955 he won his Blue (for Cambridge) in the varsity match also appearing for London Welsh. Season 1956 - 57 saw him win his club cap and he was selected for a Welsh Trial. The following year he was in the Cardiff, Barbarians and Wales teams that beat the touring Wallabies. In 1959 he was selected for the Lions tour to Australasia (where he played in every test against Australia and New Zealand) and Canada. In October 1960 he played his 82nd and final game for Cardiff before transferring to Bridgend.