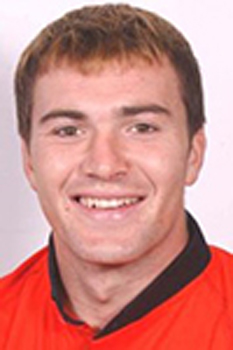 Iestyn Harris was born 1976 in Oldham, Greater Manchester and played Rugby League, first for Warrington (in 1993) and then joining Leeds Rhinos in 1997. As a Rugby League player he represented both Wales and Great Britain – playing in 31 test matches. In 2001 he was persuaded by the WRU to switch codes and jnoined Cardiff. As an experienced player he was fast tracked into the national team and made his debut for Wales against Australia having little more than three hours of union experience to call on. After four years as a Union player he returned to League (citing family reasons for the return north) signing for Bradford Bulls before finishing his career with Featherstone Rovers
At the conclusion of his playing career in 2009 he was named as coach of the Welsh Rugby League team.
Following his career in both rugby codes Harris wrote a book entitled "There and Back - My journey from League to Union and back again”.