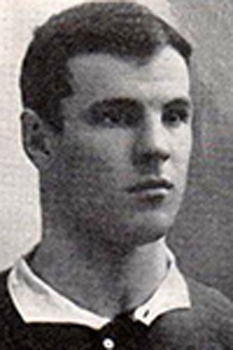 Willie Llewellyn began his club rugby with Ystrad Rhondda before moving to Llwynypia. In 1900 he moved to London and joined London Welsh where he was made captain of the side. On his return to Wales, Llewellyn joined Newport and stayed there for four seasons before going to play for Penygraig before he joined Cardiff.
Llewellyn gained 20 Welsh caps, making his debut against England in 1899 and scoring four tries in the match. He was part of the 1900,1902 and 1905 Triple Crown winning sides and also part of the great Welsh side that beat the All Blacks in 1905. In 1904 Llewellyn was chosen to tour Australia with the British Lions and played in four tests, scoring four tries in the first three tests. When Llewellyn died in 1973 at the age of 95, he was the last of the 1905 Wales team that beat the original All Blacks.

Wikipedia says his name is William Morris Llewellyn – but this is an error. The birth and death records both show his name as Willie Llewellyn