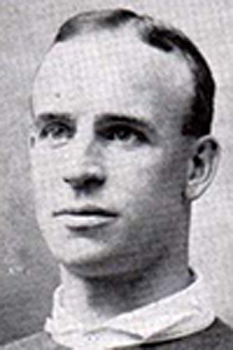 Erith Gwyn Nicholls played 242 games for Cardiff between 1892 and 1910, scoring 111 tries, including 4 in one match against Cardiff and District RU. Captain of Cardiff 4 times he gained 24 Welsh Caps,10 as captain, represented the Barbarians and went on the British Lions tour to Australia in 1899.
In his time Gwyn Nicholls was known as the " Prince of Three-quarters" and The Gwyn Nicholls Memorial Gates at the Arms Park were erected by public subscription as a tribute to him. The gates were originally at the entrance to the ground at the bottom of Quay Street, but when the National Stadium was built the gates were relocated to their current location at the entrance opposite the Angel Hotel.
As would be expected of one of the greatest players ever to wear the famous Blue and Black there is a wealth of available information about his life and career. There is the book ‘Prince Gwyn’ by David Parry-Jones and also a ‘Facebook’ page https:www.facebook.com/EGwynNicholls. Gwyn Nicholls is also a member of the Cardiff Rugby Hall of fame and more information is contained on that section of the club website.
His brother Sydney Herbert Nicholls and his son Geoffrey Herbert Nicholls also played for the club.