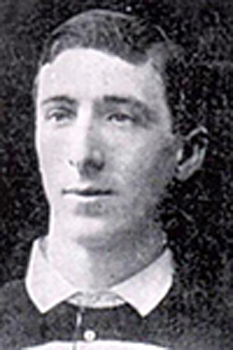 John Lewis (Johnnie) Williams was a worthy successor to Tom Pearson among the next generation of great club wings. Born in Whitchurch, and educated at Cowbridge Grammar School he scored a hat trick of tries on his club debut in 1903 and in 199 games for Cardiff he scored 150 tries. In his international career he scored 17 tries in 17 games for Wales he was a British Isles test player and a member of the Cardiff side that beat the Springboks in 1907 and the Wallabies the following year. Needless to add, he scored tries in both those club victories. In 12 games for Cardiff against the Barbarians between 1904 and 1910 (when the teams met twice a season) he scored 15 tries. In 1909 – 10 he was club captain.
John Lewis Williams died at Mametz Wood during the Battle of the Somme on 12th July 1916, he was 34 years old.
Further details on Johnnie Williams can be found in Gwyn Prescott’s book “Call Them to Remembrance”.