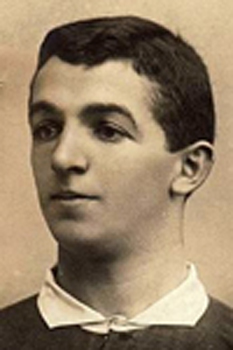 Dr Edward "Teddy" Morgan was born in Aberdare on 22nd May 1880 and was to become famous as the Welsh wing who scored the try that beat the 1905 All Blacks in Cardiff (the only defeat they suffered in 35 matches of the tour). It is also said that he led the Welsh team in singing "Hen Wlad Fy Nhadau" in response to the New Zealand 'Haka' - the first time an anthem was sung prior to an international rugby game.
Having moved from Newport to London in 1902 to complete his medical studies, and play rugby, at Guy's Hospital London, Morgan played for London Welsh and was selected for his first cap that year against England. Moving back to Wales, he practiced as a doctor in Swansea and played for the Swansea club from 1908-12. Teddy Morgan ended his playing career at Swansea around 1912 and continued as a GP in his practice in Sketty, before moving to East Anglia. He died on first September 1949 in North Walsham.
An outstanding rugby player, he played for London Welsh, Newport and Swansea - appearing only once in the Blue and Black of Cardiff, during the 1905-6 season, at the request of the Welsh Rugby Union.