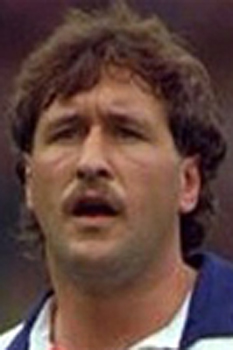 Mike Teague was born and raised on a pig farm a few miles outside Gloucester. Known as 'Iron Mike' to Gloucester fans he joined his home town club as an 18-year-old in 1978 - 79 season making 4 appearances in his first season. The majority of his rugby career was spent in Gloucester for whom he played 291 games, but he also had brief spells at Cardiff (playing for the club once in April 1981 against Cote Basque and then appearing in half a dozen games in 1985), Stroud and Moseley.
He gained 27 England caps between 1985 and 1993 and played in three internationals for the British and Irish Lions in 1989 against Australia and 1993 against New Zealand.
after retiring aged 34 at the end of the 1994/1995 season he was appointed to the newly created post of team manager at Gloucester.