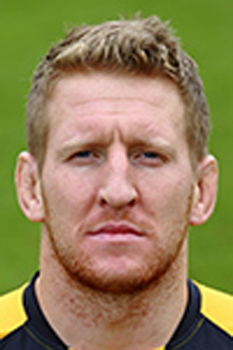 Bradley Davies (born in Llantrisant in 1987) is the son of former Pontypridd player Bleddyn Davies who was also a lock forward.  Bradley’s first position as a youngster was outside half playing for Pontyclun Juniors but at the age of 14 he found his natural position at Lock.
Davies played for all age group levels for Wales and was captain of the U20s squad when they won the Grand -Slam in 2005. He was selected to tour with Wales in 2008 to South Africa but due to injury did not play and when he made his Welsh debut in 2009 against Scotland it was as a replacement for Shane Williams – a 198cm second row replacing a 170cm wing is the stuff of trivia questions.
A product of the Cardiff Blues Academy he played 17 games for Cardiff and 118 for Cardiff Blues before spending two seasons with Wasps. He returned to Wales in 2016 when he signed for the Ospreys.