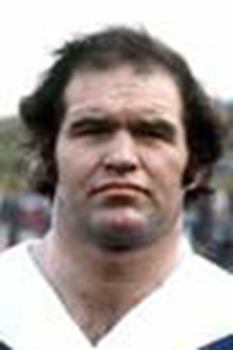 Jim Mills was a former youth player and played Cardiff from 1963 until 1965, scoring one try in 16 appearances and gaining his Athletic cap in the 1963 - 64 season. In 1965 he moved to Rugby League where he had a great career. Between 1965 and 1980 he played almost 350 games for Halifax, Salford, Bradford Northern, North Sydney, Widnes and Workington Town as well as 24 games for Great Britain and Wales. Over half his games were for Widnes, for whom he played 188 times. Originally a second row forward the move to Rugby League saw him converted to prop.

More information about the career of Jim Mills can be found in the book ‘Big Jim: Jim Mills - A Rugby Giant’ by Peter Lush and Maurice Bamford.