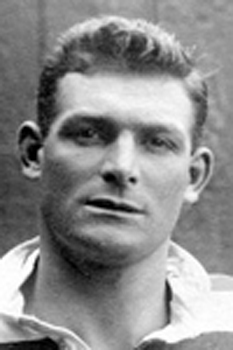 Frank Stephens was born in 1899 in Drybrook, Gloucestershire but brought up in Blackwood. After joining Cardiff from Bargoed in 1923, he played 59 games in two seasons, scoring two tries in the process.
In 1925 he was signed by Wigan rugby league club, going on to play for Batley and Rochdale, playing in the first ever Rugby League Cup Final at Wembley (against Dewsbury). Whilst playing rugby league Frank represented Monmouthshire (RL) and Glamorgan and Monmouthshire (RL) also gaining 4 Welsh Caps .
Frank Stephens passed away in Wigan on March 11th 1971 aged 71.