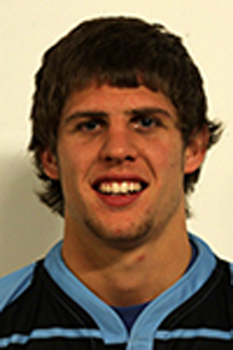 Tom Williams, full-back or wing, his brother Lloyd is a Welsh international and his father is former Welsh international scrum-half Brynmor. Tom made his Cardiff debut against Aberavon in 2010 and in 2011 scored a record equalling six tries in Cardiff’s 50 – 11 victory against Tonmawr. Two years after his Blue and Blacks debut he made his debut for Cardiff Blues against Newport Gwent Dragons. After 3 seasons with the region, he moved on loan to Scarlets and in May 2016, it was announced that Williams had signed a two-year contract with the Scarlets. At the end of the 2017-18 season Tom returned to the Arms Park and later signed for English Championship side Jersey for the 2019-20 season.
In 2012-13 he was selected in the Wales 7s Squad for the World Series 7s.