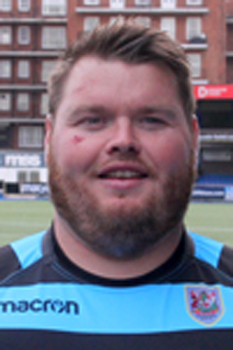 Merthyr born Ian Jenkins had played for Bedwas and Bargoed before joining Cardiff for the 2017-8 season and playing his first game as a replacement against Cross Keys in September 2017. Although starting out as a prop the majority of appearances for the Blue and Blacks were as hooker. In two years at the Arms park Jenko played 52 games and scored 10 tries for Cardiff.