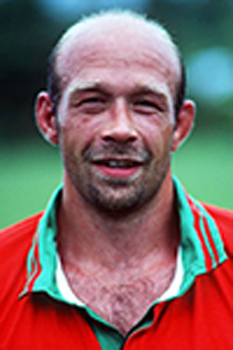 Richie Collins started his rugby career with Cardiff district side St Albans before moving on to play for Pontypridd, Cardiff and, courtesy of his occupation, South Wales Police.
A senior Welsh international at both rugby and basketball, Richie's success was based on his high levels of physical fitness and ball handling skills. He made his debut for Pontypridd in 1982 and rejoined the club for a second spell in 1993.
In between he played for Newport, Cardiff, South Wales Police, Pontypool, Ebbw Vale and Bristol as well as being invited to represent the Barbarians. His international honours with Wales included tours of New Zealand in 1988, Australia in 1991, Canada in 1994 and two world cup campaigns. His Welsh debut came in 1987 as a replacement in the Five Nations clash against England and he gained a total of twenty-eight caps scoring two tries.
Collins returned to Sardis Road Pontypridd as a coach for a time in 2000.