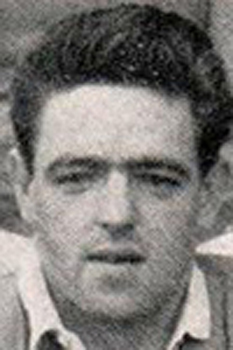 Charles Lynn 'Cowboy' Davies was born in Pretoria, near Bancyfelin in Carmarthenshire and attended Queen Elizabeth Grammar School, Trinity College, Carmarthen and the City of Cardiff College of Physical Education. Davies played rugby from a young age and represented the Welsh Secondary Schools (in 1946 and 1947) proving his great pace by being the Welsh Schools 100yds Champion in 1947. His rugby career took in spells at Carmarthen Athletic, Glamorgan Wanderers, Llanelli and Cardiff.
During a six year stay at the Arms Park he played 75 games for Cardiff scoring 25 tries and was selected to represent Wales, winning three caps in 1956. His debut was against England under the captaincy of Cliff Morgan when he scored a try that he ran in from 40 yards. Further international recognition came, not on the rugby field but back on the athletics track when, in 1957, CL represented Wales AAA.
As for his nickname? That was given him by the Cardiff legend Stan Bowes due to a hat that CL used to wear that looked like a cowboy hat – the name stuck. Sadly in 1959 somebody ‘borrowed’ the hat and it was never seen again.