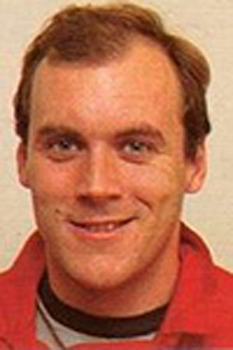 Arthur Emyr Jones (known as Arthur Emyr) was a block busting winger who played for Swansea and Cardiff. The bulk of his career was with the All Whites for whom he made 150 appearances, scoring an amazing 153 tries to make him the club's all-time record try scorer. He moved to Cardiff in 1991 but injury hampered the latter part of his career and he only made a handful of appearances at the Arms Park. Arthur represented Barbarians, Wales Students, Wales Universities, Wales "B” and Wales - gaining 13 caps for Wales, making his debut against England in 1989. In 1990 he was selected as Welsh player of the year.
After retiring he developed a successful career in the Welsh language media.