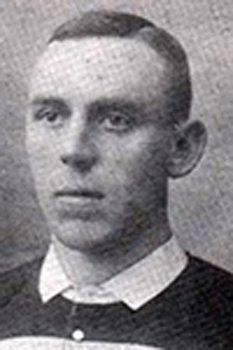 Rhys Thomas Gabe was born in 1880 as Rees Thomas Gape in Llangennech, Carmarthenshire. Gabe started his rugby career with Llangennech before making his debut with Llanelli at the age of seventeen. In 1901 he moved to London to study at Borough Road Training College and joined London Welsh. After qualifying as a mathematics teacher he took a teaching post in Cardiff and joined the Blue and Blacks. He played for Cardiff between 1902 and 1910, captaining the club in the 1907 - 8 season, scoring 51 tries in 115 appearances. Gabe won his first cap for Wales against Ireland in 1901 playing on the left wing and his 24 caps for Wales included the famous victory against the 1905 All Blacks. During his Welsh career he scored 11 tries.
Gabe retired from the international stage in 1908, but still occasionally appeared for Cardiff.
Gabe was a fine cricketer (occasionally playing for Glamorgan) as well as a keen golfer. He was a member of Radyr Golf Club where he was club captain, continuing to play well into his eighties.
He died in Cardiff in 1967 at the age of 87.