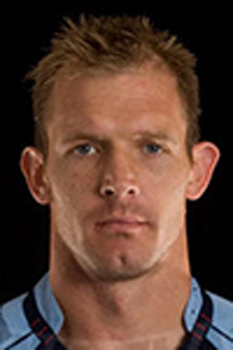 Dafydd Rhys James was educated at Brynteg Comprehensive School in Bridgend and started his senior rugby career as a centre with Bridgend. Spells with Pontypridd and Llanelli followed before he returned to Bridgend in 2001. When Regional rugby started in 2003 he joined the newly formed Celtic Warriors who were based in Bridgend and Pontypridd but when the Warriors folded after only one season Dafydd moved to Harlequins. A year later he was back in South Wales to play for the Llanelli Scarlets. After four years at Stradey Park and Parc y Scarlets he joined Cardiff Blues – playing four times for the region and twice for Cardiff before spending a season at Sale. During his career Dafydd played with great success at Centre and Wing, scoring 29 tries in the Heineken (European) Cup and 15 tries for Wales as well as scoring regularly in domestic league fixtures.
His international debut came in 1996 against Australia in Sydney and he went on to gain 48 caps for Wales as well as touring with the 2001 British and Irish Lions to Australia. former Welsh international who played on the Wing or at Centre.