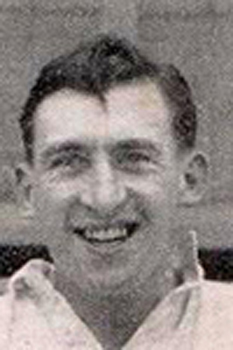 Alun Gruffydd Thomas was born in Cwmavon in 1926 and gained a Welsh Secondary School cap against England in 1945 whilst attending Port Talbot County School. When he left school he went to Aberystwyth University and played for Llanelli Wanderers, Llangennech and Swansea. In 1950 he joined Cardiff making the traditional debut for Cardiff Athletic against Old Edwardians in November 1950 and going on to make 82 appearances for the first team, making his debut against Cheltenham - his first XV cap was awarded at the end of his first season. In the game against the touring South African team in 1951 he played on the wing but when he played in the legendary Cardiff side that beat the 1953 All Blacks he was playing in the centre. His international debut came against England at Twickenham in 1952, the first of 13 appearances for Wales. Alun moved to Llanelli in 1955 and was selected for the Lions tour of South Africa. Unfortunately, injury restricted him to only 5 games on tour. and gained 14 caps for Wales
From 1963 - 1968 he was a Welsh Selector and was Assistant Manager on the first ever Welsh tour to South Africa in 1964, he was President of the Welsh Rugby Union in 1985. Two well-known relatives of Alun Thomas were the great Swansea player Len Blyth and Len’s son, the full back Roger Blyth.