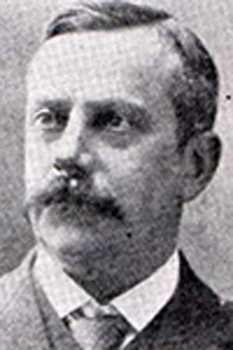 Norfolk born Charles Suckling "Charlie" Arthur played 163 times for Cardiff between 1883 and 1891. Although born in England Charlie Arthur played international rugby for Wales and won his first international cap in the second of the 1888 Home Nations championship against Ireland at Lansdowne Road.
In December 1888 he was chosen for the Wales team to face the New Zealand Maoris (the first touring team from the Southern Hemisphere) at St Helens, Swansea. The crowd thought the Swansea backs had been overlooked and booed the Welsh players from other clubs. A week later Arthur was part of the Cardiff team to face the same Maoris team and, captained by Frank Hill, the Blue and Blacks were victorious. His last international was in 1891 against England which was lost 3 -7. Although he would never play for Wales again he was still a major part of his club side and was made Cardiff captain.
Charles Arthur was also an early enthusiast in rugby history, compiling one of the first rugby union books - ’Cardiff Rugby Football Club, History and Statistics 1876 –1906’ – a copy of which is in the club archives.