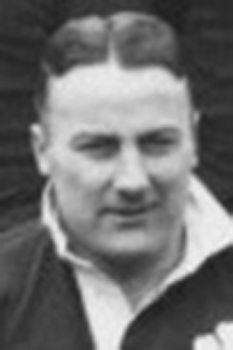 Jack Bassett, elder brother of Arthur, was born in Trebanog in 1905 and played for a number of clubs, mainly Penarth and turned out 5 times for Cardiff. Jack was happy to play for Cardiff Athletic (The Rags) from 1934 until 1936. His rugby career began with Kenfig Hill and Pyle before playing a handful of games for Aberavon. He joined the Glamorgan constabulary in 1924 and was stationed in Penarth, playing for both Penarth and the Police XV. Bassett was not the fastest full back but had a great positional sense on the field which ensured he was always close to the action. He was seen as one of the hardest tacklers in the game, and many opposing players would throw the ball into touch rather than get tackled by him.
In 1929 he won his first Welsh Cap against England at Twickenham, a game that Wales lost. The 1930 5Nations Championship saw him handed the captaincy for the 3rd game against Ireland and in the same game he gained his first international points with a drop goal. In 1930 Bassett was selected for the Lions and had an exceptional tour earning 5 caps. In 1931 he led the Welsh team to their first championship since 1922 and he was chosen to lead the team against the touring South Africans. The following year he saw his international career come to an end after his side failed to live up to expectation and secure the final leg of the Triple Crown against the Irish – he won 15 caps for Wales (9 as captain)
Jack passed away in February 1989 aged 83.