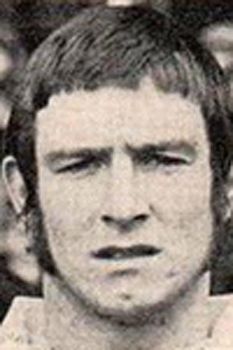 ohn Charles Bevan was born in Tylorstown in 1950 and played on the wing for Cardiff in 35 games between 1969 and 1973 scoring 25 tries as well as playing in the Snelling Sevens in 1972.
After playing for Wales Schools, Wales U15, U19 and U25s he won his first full cap for Wales in 1971 against England, going on to gain nine more caps. John Bevan toured with the British and Irish Lions to Australia and New Zealand in 1971 (although interestingly his team is shown as Cardiff College of Education rather than Cardiff, so he is not included amongst the Cardiff players that have represented the famous tourists) and he represented the Barbarians against New Zealand in January 1973.
In September 1973 Bevan switched to rugby league and joined Warrington, going on to win 15 caps for Wales and 6 caps for Great Britain.