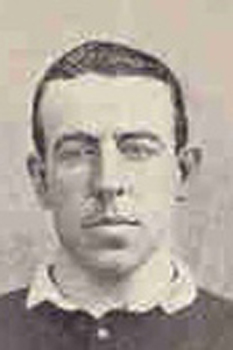 Selwyn Hanam Biggs was a Welsh international rugby union fly-half who played club rugby for Cardiff and county rugby for Glamorgan. Both Biggs and his brother Norman played international rugby for Wales, though they never played in the same match for Wales together. Biggs was described at the time as a 'certain tackler' and a 'fast, good dodger'.Biggs also played cricket for Glamorgan and was part of the team to face the touring South Africans in 1895.
Biggs followed his brother Norman when he joined Cardiff Rugby Club, the team he would represent through-out his international career. He was first selected to represent Wales in the opening game of the 1895 Home Nations Championship, the very next international after his brother represented Wales for the final time. Biggs was partnered in the half-back role with Llanelli's Ben Davies, himself a new cap; and the first of six partners he would be paired with over his nine match career. His first international was against England in a game played at St. Helens in Swansea. Under the captaincy of Wales rugby superstar Arthur 'Monkey' Gould, Wales lost 3-7, with the English forwards outplaying their Welsh counterparts in the loose. The selectors kept faith with Biggs for the next game of the Championship, away to Scotland, but switched Davies for the more experienced Fred Parfitt. Wales lost this game too, again the forwards could not contend with the opposing side and Biggs and Parfitt were replaced by Morgan of Llanelli and Sweet-Escott of Cardiff in the final game of the tournament.
The 1896 Championship witnessed a change in direction for the Welsh team, with a massive upheaval in the team selection. The selectors chose a new pairing at half-back for the first game against England, but the blame again fell on the forwards, with the English winning by a massive 25 points to nil. Biggs and Parfitt were brought back into the squad for the second game, but more importantly five new caps made their debut in the pack. The Scottish lost 6-0 against Wales at Cardiff, which was seen as an upset by the inexperienced Welsh.Biggs missed the final game against Ireland and his replacement, Llewellyn Lloyd, had a torrid time trying to defend Irish attacks.
The 1897 Championship saw Wales play just one match, after the Welsh Rugby Union withdrew Wales from international competition due to the Gould Affair, but Biggs was reselected for that match. His pairing for this game, against England, was Aberavon's Dan Jones who scored a try in a rare victory over the English. When Wales were readmitted to the tournament the next year, Biggs was given a new partner for both games, his Cardiff team-mate Jack Elliott. Wales won the Ireland game at Limerick but lost to England at Blackheath.
1898 saw Biggs captain the Cardiff team twice against the invitational touring team the Barbarians.Cardiff won both matches with Viv Huzzey scoring two tries, four conversions and a dropped goal in the second game.
At international level Biggs was dropped once more, when the charismatic James Brothers were reselected over him for the England game during the 1899 Championship. England were beaten convincingly, but the James brothers both turned professional shortly afterwards, making themselves ineligible for further appearances under the rugby union code. The selectors brought Lloyd back into the squad to partner Biggs in the final two games of the tournament, losses to Scotland and Ireland.
Biggs played one final international game, as part of the 1900 Home Nations Championship. Wales had already won the first two games over England and Scotland with the half-back pairing of Lloyd and Phillips. Biggs replaced Lloyd for the away match against Ireland, and a Welsh victory gave Wales the tournament. Biggs, like his brother in 1893, was now part of a Triple Crown winning team.
In 1904, Biggs was one of twenty sporting stars of rugby and football to be chosen on a series of collectable cards issued with Cadle's cigarettes.