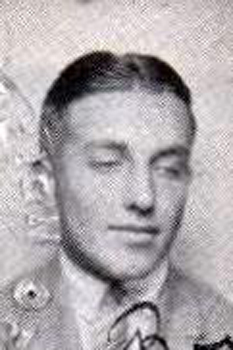 Ronald Winston "Ronnie " Boon was born in Barry on 11th June 1909. Boon began his rugby career at Barry Parade Club before playing at schoolboy level with Barry Grammar and then representing the Welsh Schools.
During his career he played for several club teams including London Welsh, for whom he would become club secretary during the 1960s, but the majority of his career was at Cardiff. He joined the club in the 1928 - 29 season and played 98 matches over the next 11 seasons, scoring 76 tries - including four in a match against Watsonians in 1930.
In 1930 he was selected to play for Wales in the Five Nations against Scotland and went on to gain 12 caps in total. As well as international honours Ronnie Boon played three games for for the Barbarians, in 1932 - 33, against Leicester, Penarth and Newport.
Having qualified as a teacher in 1931 Boon left Wales to study at Dunfermline College of Education and he later taught at Dunfermline High School. Whilst in Scotland he turned out for Dunfermline RFC, although he would still play for Cardiff when he could. Boon stayed in Dunfermline until 1938 when he moved to Brighton. He would later return to Wales and became a councillor for South Glamorgan County Council.
Ronnie Boon was President of Barry RFC and served on the Sports Council of Wales. In 1995 He emigrated to New Zealand where he died in 1998 aged 89.