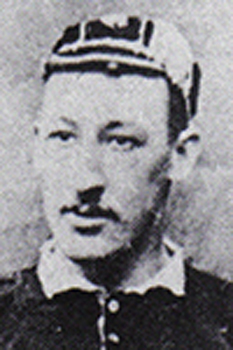 Alfred "Bobby" Brice (born in Weare Somerset) played club rugby for Aberavon and Cardiff.
Brice was known for his tough and aggressive tacking play and began his international career at Aberavon, a club he would captain from 1901-1903 before joining Cardiff and playing 36 matches over five seasons.
Brice was capped 18 times for Wales (including three triple crown successes) and made his debut against England at St Helens in 1899. He was suspended from the game for eight months after he was reported for calling the referee a "thundering Idiot" in a match against Ireland. After this incident he never played for Wales again.
Bobby Brice was a policeman with South Glamorgan Police and stationed at Port Talbot. He died in Port Talbot on May 28th 1938 aged 66.