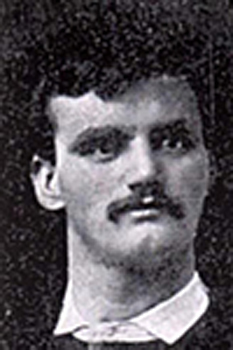 John "Jack" Alfred Brown (nicknamed Big John) was a second row who played for Cardiff and Glamorgan (County). He first came to note as a rugby player whilst playing for local side St Peters, where he was vice captain, until he moved to Cardiff in 1901. He was made vice-captain of Cardiff from the 1907 until 1910 when he left the club. Jack played for 10 seasons at the Arms Park and appeared in 221 matches, scoring 12 tries and was capped for Wales 7 times making his debut against England in 1907.
Jack Brown died in Cardiff in 1936 at the age of 55.