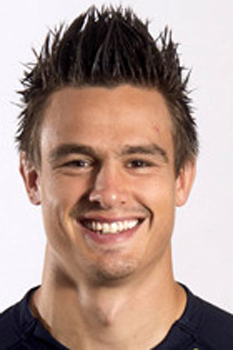 Cardiff Blues wing Czekaj was hailed a 'star in the making' after scoring an outstanding 60m try for Wales on his debut against Canada in June 2005 aged 19 years old. A product of the highly successful Llandaff Rugby Club junior section, he first started playing rugby when he was seven.
He played for Cardiff Schools and East Wales at U11 and progressed from there. The 6'3" and 16 stone wing scored five tries in the U21 Six Nations campaign and went on to score 13 tries in 18 games for Cardiff, before graduating to play for Cardiff Blues. He toured with Wales to Argentina in 2006 and made his Six Nations debut against Ireland in 2007.
In the summer of 2007 Chris was selected to tour Australia with Wales but was dealt a cruel blow in the second test. He was carried from the field during the first half of Wales 31-0 defeat to Australia after badly twisting in a tackle from Wallaby hooker Steven Moore. Chris had surgery on his broken right leg while in Australia and missed the 2007 Rugby World Cup.