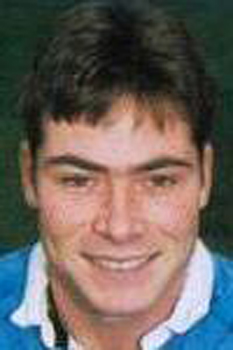 Grant Esterhuizen was born in Alexander Bay South Africa and played seven times for Cardiff in the 1999 - 2000 season before leaving to join Bourgoin in France. Esterhuizen also played for Clermont-Auvergne in France and the Gauteng Lions in South Africa. A South African international he made his Springbok debut against New Zealand in July 2000.
There are some articles that say that he has made an appearance on BBC's Strictly Come Dancing series - this is not correct. There is a South African ballroom dancer called Grant Esterhuizen but it is not the same person as the rugby player.