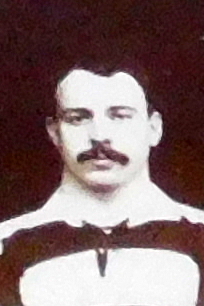 Ernie George was born in 1871 and played for a variety of clubs including Cardiff, Pontypridd and Swansea. A masonry worker by trade, Ernie began his rugby career at Llantwit Major but then switched to Pontypridd. Whilst playing for Pontypridd he was first selected for Wales and gained three Welsh caps between 1895 and 1896. Ernie played 23 games for Cardiff between 1895 and 1900, scoring two tries. Ernie passed away in November 1952.
His brother Llew also played for Cardiff.