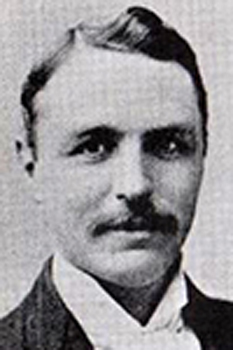 Francis Escott 'Frank' Hancock was born in Wiveliscombe, Devon and played club rugby for Wiveliscombe, Somerset and Cardiff. Hancock first played rugby in Somerset, captained his local club and represented the Somerset county team. In 1884 he moved to Cardiff to become involved in the family brewing company and joined the Blue and Blacks, playing 50 matches between 1884 -1886 scoring 35 tries. He was made captain of Cardiff in 1885 - 6. Although English born he gained four Welsh caps between 1884 – 1886, making his debut against Ireland. His final international appearance was against Scotland in 1886.
Frank Hancock died in Devon in 1943, aged 84.