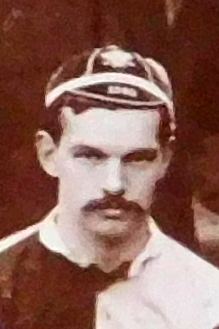 Hugh Ingledew was a Welsh international forward who played for Cardiff on 69 occasions between 1887 and 1892. Born in Cardiff in 1865, his Welsh debut was against Ireland in 1890 and he made three appearances in all for the national team (Ireland in 1890, England and Scotland 1891). In 1890 he was an original member of the Barbarians (although he never played for the club) and for many years he also played cricket for Cardiff and Glamorgan scoring 114 runs in seven innings and was the treasurer of Glamorgan from 1904-1912.
Educated at St Edward’s School, Oxford and Merton College he was Solicitor by profession, specialising in railway Law. Hugh Ingledew was instrumental in helping the local Cardiff Cricket and Rugby Club purchase the Arms Park from the Bute Estate in 1922.
Hugh Ingledew was a WRU referee, served on the Cardiff Committee 1895-6 and 1896-7 and served on the Committee of Cardiff Athletic Club for many years following the acquisition of the ground.
From 1911-1913 he was Captain of the Royal Porthcawl Golf Club and later a life member.
He was also Involved in the establishment of the School of Mines at Treforest (now the University of South Wales). Amongst Ingledew’s awards he was a Knight of Grace of the Order of St John of Jerusalem.
Hugh passed away in 1937 at the age of 71.