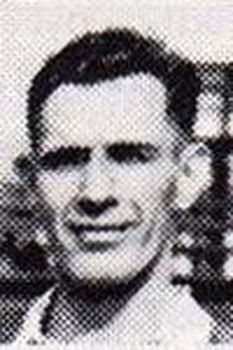 David Maldwyn James was born in Cilfynydd in 1913 and attended Pontypridd Boys Grammar School before working underground as a collier for the Albion Colliery, Cilfynydd.
During the early 1930s he played rugby for Cilfynydd and Pontypridd at Hooker and in 1937 - 38 he was selected for the Welsh international trials. Unfortunately, a severe injury to his right foot kept him out of the game until 1941.
In 1945 he joined Cardiff and although playing hooker was a prolific goal kicker contributing 145 points to the season. In three seasons at the Arms Park he made 85 appearances for the club. During his time with Cardiff he played in four 'Victory' internationals for Wales at the end of the Second World War. Caps were not awarded for these matches, but James did later win five caps for Wales. His debut was in the Wales v Australia match on 20th December 1947 at Cardiff Arms Park when Maldwyn James became the oldest player to make a debut for Wales - he was aged 34 years and five months.
When he retired from rugby he continued to be involved with the club, serving on the Committee in season 1949 - 50 and thereafter in many capacities until he retired in 1959 - 60. In 1972 – 3 he was re-appointed to the Committee and was Chairman in season 1975 - 76 before finally retiring in 1984.
Maldwyn James passed away in Aberdare in July 2003 at the age of 90.