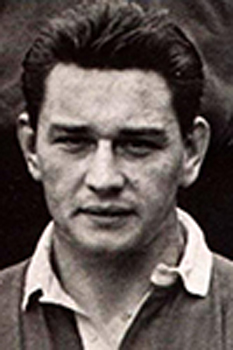 Kingsley Daniel Jones was certainly a tight head prop of the modern age. Standing over 6ft tall and weighing nearly 17st, like many others of his generation he was converted from the second row, where he played in 1957 when Cardiff beat the Wallabies, to become a top-class scrummager. Educated at Llandovery College, Kingsley was a wholesale fruit merchant and one of his hobbies was golf. Kingsley played 190 games for the club between 1955 and 1964,scoring eight tries. He gained ten Welsh caps, Making his international debut against  South Africa in 1960 he won ten Welsh caps and went on tour with the 1962 British and Irish Lions, playing in 15 matches in South Africa including four tests, as well as representing the Barbarians against East Midlands in 1962 - 63 Mobbs Memorial Match.