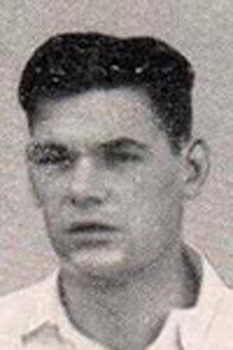 Sid Judd was born Llanrumney and played for Carmarthen Athletic (whilst at Trinity College) and Cardiff. He was an exceptional back row forward and had three seasons at international level and the captaincy of Cardiff under his belt before he was 26 years old. When the 1953 New Zealand All Blacks were beaten by both Cardiff and Wales Sid Judd was among the try scorers. In all he played 184 games for Cardiff, gained 10 caps for Wales and represented the Barbarians against East Midlands in the 1951 Mobbs Memorial Game. Selection for the 1955 Lions tour to South Africa seemed inevitable but Judd was struck down with leukaemia.
Sid Judd died in February 1959 at the age of 30.