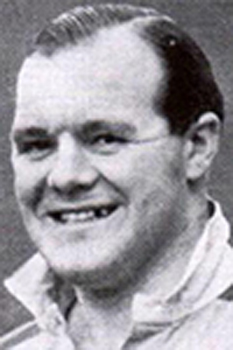 Dr Jack Mathews was born in Bridgend in 1920. With Bleddyn Williams, Mathews formed a centre partnership for Cardiff, Wales and the Lions that is regarded as one of the finest ever in the game. Mathews played 180 games for Cardiff and won 17 caps for Wales and 6 with the British Lions. In 1949 he played one game for Newport, turning out for the Black and Ambers against Falmouth during their tour of the West Country. The following day he was playing for Penzance – against Newport! A general practitioner by profession he travelled with the 1980 Lions as team doctor on their tour of South Africa.
From a youth he was a keen sportsman and in 1937 he won the Welsh AAA junior 220 yds title. A year later after spending three seasons in the Welsh Secondary Schools rugby team, and at the age of just 18 years old, he played in a senior Welsh trial.
Jack Matthews was nicknamed ‘Ironman’ and in 1943 (whilst stationed with the RAF at St Athan) he showed how well deserved the name was. In an amateur boxing contest, he fought against Rocky Marciano (later to be undefeated World Heavyweight boxing champion) and held him to a draw. Mathews continued his connection with the sport after retiring from rugby and became the medical officer to the Welsh Boxing Association.
In 1981 he received the OBE in the Queens honours list. He was the Chairman of Cardiff Rugby Club 1954 - 55 and was appointed honorary physician to the Welsh Rugby Union in 1974. In 1999 Dr Jack was inducted into the Cardiff Rugby Hall of Fame and further information regarding his life and career can be found in that section of the club website.
Jack Matthews died in Cardiff in 2012 at the age of 92.