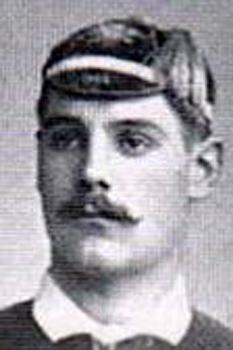 Frank Matthew (Fred) Mills was born in Mountain Ash in 1873. Although Mills originally played for Mountain Ash, he came to note as a rugby player in 1892 when he joined Swansea, gaining his first international cap whilst in his first season with the All Whites. In 1893 Mills was part of the Welsh squad that won the Triple Crown for the first time. At the end of 1894 season Mills is recorded as playing at least one game for Glamorgan and that the following season he transferred to Cardiff, playing 52 games over five seasons.
Outside of rugby he worked as an undertaker. Frank Matthew Mills passed away in Porthcawl in 1925.