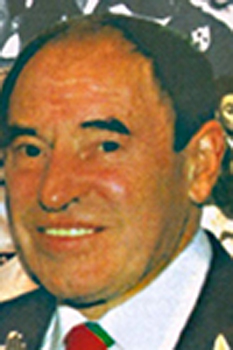 Cliff Morgan was born in Trebanog, Rhondda in 1930. Born into a mining family, he joined Cardiff straight from school in 1949, playing at fly-half, and also played club rugby in Ireland for Bective Rangers in the 1955/56 season. Whilst at Cardiff he played 202 matches over nine seasons 1949/50 - 1957/58 scoring 38 tries.
In 1951 he won his first cap for Wales against Ireland in 1951, was part of the Grand Slam winning Welsh team of 1952 and was made captain of Wales in 1956. Morgan toured with the British and Irish lions in 1955 to South Africa winning four caps and played his last game of first - class rugby for the Barbarians in May 1958 at the RUEA Ground, Nairobi, versus East Africa.
Following his retirement from the game in 1958 he found a new career in broadcasting. He joined the BBC for whom he worked until 1987 and among many roles he was, for many years, a team captain on the ‘Question of Sport’ quiz programme. A regular commentator and presenter on BBC rugby broadcasts his most famous commentary is of the Barbarians v New Zealand game played at the Arms Park in January 1973. Cliff Morgan was inducted into the IRB Hall of Fame and received an OBE and a CVQ for his contribution to broadcasting.
A prolific writer, further information on the life and career of Cliff Morgan can be found in his autobiography “Beyond the Fields of Play’ first published in 1996.
In 1999 Cliff Morgan was inducted into the Cardiff Rugby Hall of fame and more information regarding his playing career can be found in that section of the club website.