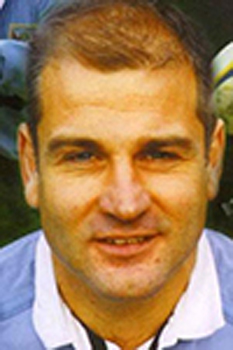 Mike Rayer began his rugby at Llandaff North, he was brought up only three doors away from the club. His father Alex, captained the club for a couple of seasons and also played for Cardiff Athletic. While at Llandaff he captained the Welsh Youth.
In 1984 he joined Cardiff for the first time until he moved to Bedford Blues in 1996 where he played for two years before re-joining Cardiff in 1998. On his return to the club he was instrumental in the setting up of the Cardiff Blues Academy. Mike played 367 games for Cardiff over the years which included a double fracture of his leg whilst playing against Treorchy at the Oval. He gained 21 international Caps for Wales, making his debut in Cardiff against Samoa in 1991 and represented the Barbarians (4 times) and Crawshays Welsh XV.
Mike turned to coaching and was involved with Cardiff U21s, Cardiff and the Academy sides as well as coaching the Barbarians. In 2005 he returned to Bedford Blues as Director of Rugby.
Mike Rayer was inducted into the Cardiff Rugby Hall of fame in 1999 and more details can be found in that section of the club website.