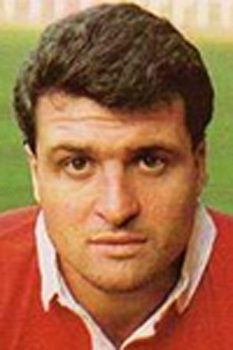 Cardiff born Mark Ring was educated at Lady Mary High School in the city. Aside from a few spells at Pontypool, “Ringo” was an Arms Park favourite from his debut at 18 playing at outside half to his final game in the 1996 Heineken Cup Final.
His Wales debut came in 1983 when he was only 20 and he was a key member of the 1988 Triple Crown squad, playing in the centre position, from where he won most of his 34 caps. At the 1991 World Cup he played for Wale s in his favoured outside half position, and it was in this position that he formed a notable half back combination with fellow Cardiffian Dai Bishop when the pair were at Pontypool.
After playing, Ring coached various clubs, including a spell as backs coach back at the Arms Park.
His career was hampered by injury, but on the field his skills and cavalier approach to the game made him one of the Arms Park's great entertainers.