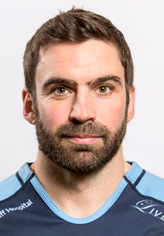 Nicky Robinson, younger brother of Jamie also attended Ysgol Glantaf. Like his brother his Cardiff career spanned the advent of regional rugby in Wales. His appearance record for Cardiff was 51 games between 2000 and 2005 and then a further 132 appearances for Cardiff Blues from 2003 until 2009. In 2009 he left the Arms Park to join Gloucester where he stayed until 2011 when he joined Wasps. Between 2006 and 2009 he gained 13 Welsh caps, making his debut against Ireland at Landsdowne Road and in 2003 and also played for the Barbarians.
In 2016 Nicky returned to the Arms Park making a further 7 appearances for Cardiff Blues as well as spending time as a kicking coach.