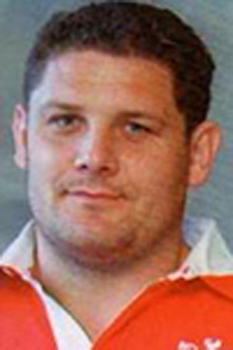 Although born in England, Peter Rogers qualified to play for Wales through his Trimsaran - born father. At an early age the family moved back to Wales and Peter attended the world renowned rugby academy, Llandovery College. Originally a hooker he turned out for Maesteg and Bridgend before he emigrated to South Africa.
It was here that he was converted to a prop whilst playing for Johannesburg club side Pirates and then the Transvaal Provincial side and super 12 team Gauteng Falcons. In the summer of 1999 he joined Newport from London Irish and then switched to Cardiff in 2000. He gained 18 caps for Wales between but his first appearance in a Welsh jersey was against Scotland in an "A" international at Myreside. Peter came out of retirement for the 2007 - 08 season playing for Bridgend in the Welsh Premiership.