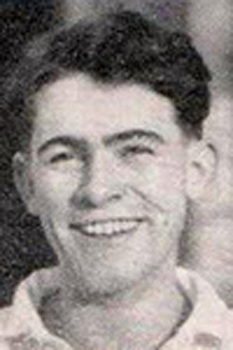 Gwyn Rowlands was born and educated in Berkhamsted and had dual qualifications for both England and Wales. In the 1948 - 9 season he had unsuccessful trials for the England national team and was invited for trials for Wales the following year. While on national service for the Royal Air Force at St Athan he accepted an invitation to join Cardiff Rugby Club. In 1953 he was part of the Cardiff team to face to touring New Zealand team and was instrumental in a famous victory, his cross-kick set up the first Cardiff try which he also converted. His performance won him his first Welsh international cap when he was brought in to face the same touring New Zealand side. Again he was instrumental to his team’s success, kicking two conversions and a penalty goal in the 13-8 Welsh victory. He played in three more internationals for Wales, two in the 1954 Five Nations Championship (against England and France) and one in 1956 (against France). During his career with Cardiff he scored 66 tries in 99 games and twice registered more than 100 points in a season. When he retired he returned to his hometown of Berkhamsted to become a doctor, later taking over his father's general practice.
Gwyn passed away at Stoke Mandeville Hospital near Aylesbury on 30th April 2010 at the age of 82.