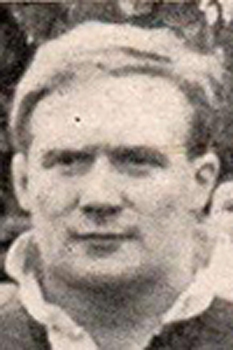 Keith Rowlands was born in Brithdir, the son of a Glamorgan Constabulary Police Inspector, and attended Cowbridge Grammar school and Aberdare Grammar school where he captained the school at rugby and cricket and won a Welsh schools cap in 1955 against England in Cardiff.
In 1961 he joined Cardiff having played previously for Aberaman, London Welsh and Llanelli (where he stayed for one season). Rowlands played 147 games for Cardiff, scoring 21 tries until his retirement in 1967. In March 1962 he gained the first of five Welsh caps against France and he made his debut for the Barbarians at Leicester in March 1962 (later captaining the side in 1966). In 1962 he was also selected for the British Lions tour of South Africa, playing on 19 occasions including all three tests, and also in the non-cap match with Kenya.
When he finished playing he became a committee member at Cardiff and was Chairman for the 1974 season.
Whilst serving on the Cardiff committee, he became a member of the Welsh Rugby Union. Rowlands was appointed as one of the WRU's two representatives on the International Rugby Board in 1983 and became the IRB's first general secretary in 1988. Under Rowlands guidance, its headquarters moved from Bristol to Dublin. This was key in turning the Rugby World Cup into one of the leading sporting events in the world, which Rowlands was at the heart of as one of its directors.
Rowlands decided to retire at the end of the 1995 Rugby World Cup. However, IRB chairman Vernon Pugh and the RWC chairman Leo Williams persuaded Rowlands to take on the Chief Executive's role at the 1999 Rugby World Cup in Wales. He resigned all positions with the IRB and the RWC after the tournament ended.
In 2004 Rowlands beat WRU Secretary David East in the contest to succeed Sir Tasker Watkins as Welsh Rugby Union president.
He was patron of Aberaman, President of Rhiwbina, the Welsh Academicals and the Welsh Deaf association. He was also was President of the Cwmbach Male Voice choir.
Keith Rowlands died in Cardiff in 2006 at the age of 70.