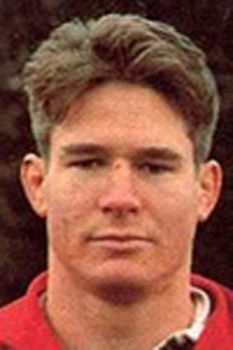 Stuart Roy, English born but Anglesey raised, had a short spell with Neath before he joined Cardiff and he was part of the Heineken league title winning side in the 1994 - 95 season. After a 10-year career at the Arms Park during which he played 161 games he joined Pontypridd before moving to Newport. A qualified Orthopaedic Surgeon by profession he re-joined Pontypridd as part of their Medical team once he had retired from playing and also provided Orthopaedic services to several Welsh Premiership sides and regions. As a junior he represented Wales Schools, Wales U19s, Wales Students, Wales A, Wales B and also won a blue whilst at Cambridge University (he was also a member of the Welsh Youth windsurfing squad). His only senior Welsh selection came as a replacement against Japan in the 1995 World Cup in South Africa.