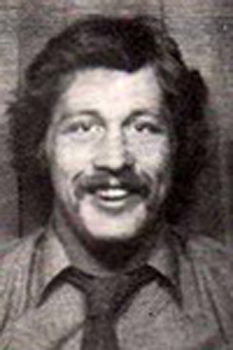 John Peter Scott was a back row forward who played most of his club rugby for Cardiff, joining the Blue and Blacks in 1978. Educated at Heles School he went on to play for Exeter before making his Cardiff debut in September 1978 against the East District. During that season he was part of the Blue and Black team that narrowly lost to the All Blacks. Scotty was made Cardiff captain the following year and presided over one of the greatest cup periods in the Club’s history Under Scott’s captaincy Cardiff won the cup on five occasions in the 80s – 1981, 1982, 1984, 1986 and 1987. In all he made 268 appearances being on the winning side 200 times. His first try came in his third games at Bristol and in all he scored 36 tries, most of them from the back of a dominant scrum. A well-respected member of the Blue and Blacks team, and a firm favourite with fans, he eventually hung up his boots in April 1988 after a game against Rosslyn Park.
On the International scene Scott won 34 England caps between 1978 and 1984, forming a strong partnership with scrum half Steve Smith (he also roomed with Smith while on international duty). He played in all four games in England's 1980 Grand Slam winning team, and he also played for the World XV against Argentina on 9th August 1980 in Buenos Aires, losing 36–22. John Scott was in the same mould as England team-mate Roger Uttley in that he could play in either the second or back row, playing three times at lock forward whilst earning thirty-one caps in his favoured position of Number Eight. He was also one of a number of Englishmen of his era to play for a Welsh club along with the Swansea pair of Tony Swift and Maurice Colclough.
His international debut came in 1978 at the age of 23 in a defeat by France, although England did achieve respectability that year by winning two of their four matches. He played in all four of matches of the 1979 season, one as a replacement, and England ended with a record of one win, one draw and two losses. However, with the exception of the last quarter of an hour against Wales where they conceded four tries, England performed well, particularly up front.
In 1999 J.P. Scott was inducted into the Cardiff Rugby Hall of Fame and further details about him can be found in this section of the club website.